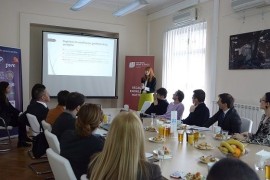 Law office Cvetković, Skoko & Jovičić held a Working breakfast on April 1st 2015 on the subject of “Application of the Law on Amendments to the Law on Planning and Construction” at the premises of the Serbian Association of Managers who was also organizer of the event.

Law on Amendments and Supplements to the Labor Law – 2013

In focus: The Law on Amendments and Supplements to the Labor Law (hereinafter referred to as: the “Law”) was published in the Official Gazette of the Republic of Serbia no. 32/2013 dated April 8th, 2013 and entered into force on April 16th, 2013.

Law on the Protection from Fire

In focus: the new Law on the Protection from Fire („Official gazette of the Republic of Serbia“ no. 111/2009) has entered into force on January 6th 2010, and is being implemented as of October 6th 2010. The Law prescribes general obligations of all legal persons for the prevention and protection from fire, as well as specific obligations depending on the category of endangerment from fire into which the legal person is classified.

Law on the Prevention of Harassment at the Workplace

Law on Preventing Population from Exposure to Tobacco Smoke